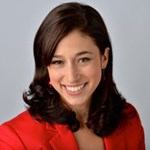 Catherine Rampell is a twice-weekly, nationally syndicated opinion columnist at The Washington Post. She frequently covers economics, public policy, politics and culture, with a special emphasis on data-driven journalism. Before joining The Post, Catherine wrote about economics and theater for The New York Times. Catherine has received the Weidenbaum Center Award for Evidence-Based Journalism and is a Gerald Loeb Award finalist. She grew up in South Florida (the New York part) and graduated Phi Beta Kappa from Princeton University.