The Wealth of Nations Begins at Home

Stable families contribute not only to the success of individuals but to the economic prosperity of the broader society according to W. Bradford Wilcox and Joseph Price. They present their view in the chapter “What Does Family Structure Have to Do with Growth around the Globe,” in the latest publication to stem from an STI experts meeting.

Economics has its roots in the Greek word “oikonomia,” which means the “management of the household.” Yet economists across the ideological spectrum have largely neglected the links between household family structure and the macroeconomic welfare of nations. With economics professor Joseph Price, IFS senior fellow W. Bradford Wilcox sought to remedy this oversight by examining the association between family structure and global economic growth in a chapter in the new book, Unequal Family Lives.

According to Wilcox and Price:

A stable marriage matters in part because it allows couples to make decisions over time that maximize the economic prosperity of their family unit. Stably married persons have incentives to invest in their marriage and benefit from specialization and economies of scale; their households also tend to earn and save more than their peers who are unmarried or divorced.

They argue that because of the economic benefits of marriage, “the more children are born and raised in stable, two-parent families, the more a society should experience economic growth.” To test their theory, they utilized marriage statistics, historical data on children, and gross domestic product (GDP) data from over 90 countries between 1968 and 2014. In a fixed-effects regression analysis, they found a positive relationship between marriage and economic growth around the world. Specifically:

They conclude, "There is clearly a link between family structure and economic growth.”

But why would married, two-parent families help to boost the wealth of nations? Wilcox and Price pinpoint three specific mechanisms that may explain the family-wealth connection, showing that more two-parent families 1) foster more household savings, 2) decrease crime, and, 3) improve children’s academic success across the globe. 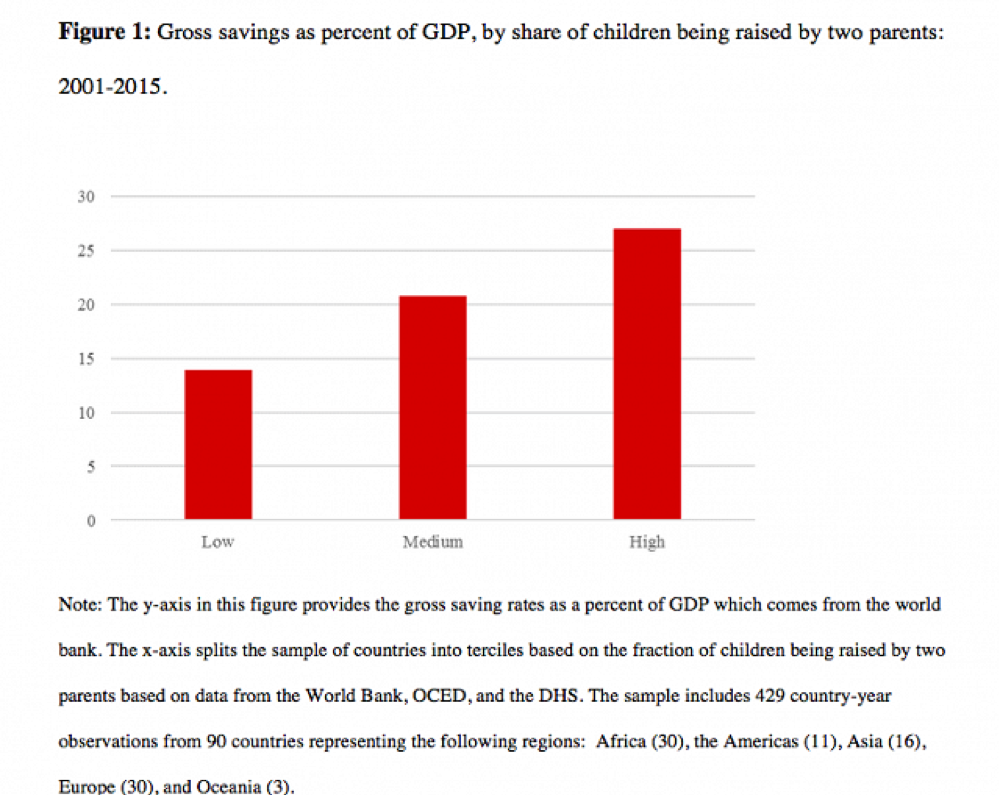 Because safer communities are more prosperous, Wilcox and Price also explored the connection between two-parent families and violent crime in countries around the globe. We know that marriage and stable families help to reduce crime in two primary ways: 1) by discouraging men’s involvement in criminal activities and 2) by reducing children’s risk of involvement in delinquency and crime as adolescents and young adults. They point to neighborhood-level data from the U.S. and Canada, which indicates an association between more married families in a community and less crime. But what about violent crime at the country level? Using data from the United Nations Office on Drugs and Crime (UNODC), they found a strong negative association between the proportion of children raised in two-parent families and homicide rates in 83 countries, including countries in Africa, North and South America, Europe, Asia, and Oceania. 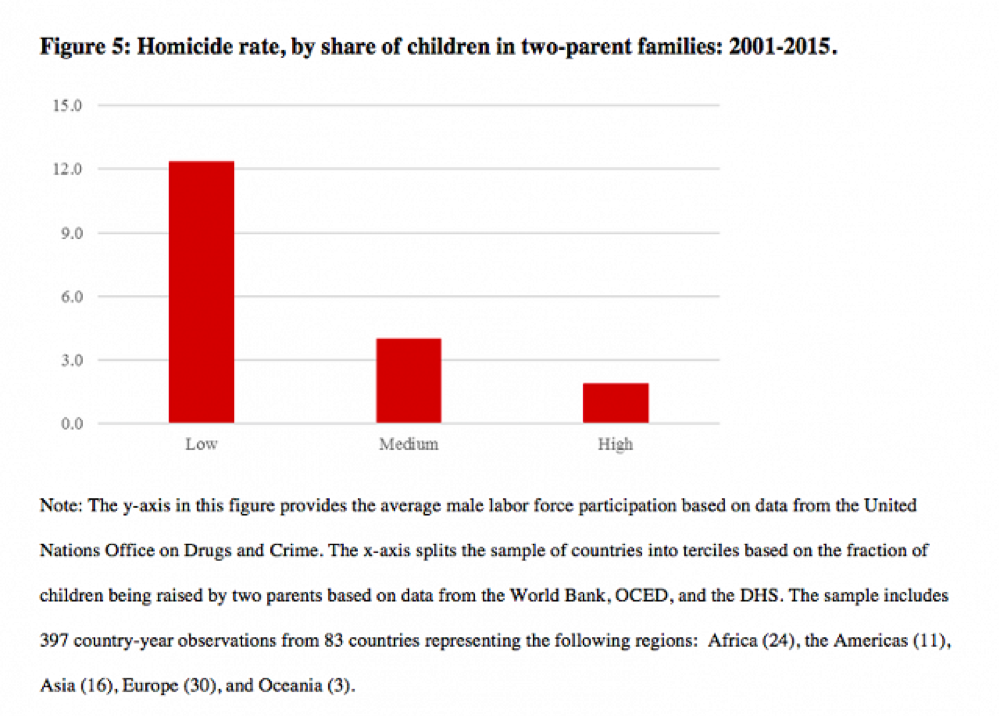 As the figure above illustrates, the average homicide rate is more than four times larger in countries in the bottom third in terms of children living with two parents compared to countries in the top third.

Another way more marriage and two-parent families may lead to higher economic growth is by boosting human capital for children. As Wilcox and Price explain, “children may benefit from the higher levels of time, money, and stability found in two-parent families, compared to single-parent families,” resulting in better educational outcomes that improve their future career success. In the U.S., there is ample research linking children’s academic success to married families. For example, children in married-parent families are more likely to graduate from high school, earn a college degree, and get a good job as adults than children from single-parent families.

Overall, Wilcox and Price show that marriage and two-parent families may help to foster global economic growth by increasing household savings rates, decreasing crime, and boosting children’s educational attainment in developed nations. While they acknowledge that their “results cannot definitively prove that family structure has a causal impact on economic growth,” they note, "if nothing else, the patterns documented in this paper suggest that stronger families, higher household savings rates, less crime, and higher economic growth may cluster together in mutually reinforcing ways."

These findings demonstrate that we cannot fully understand the forces fueling the wealth of nations without also paying attention to the health of the families that call those nations home.