Frontiers of Globalization: Kinship and Family Structures in Africa 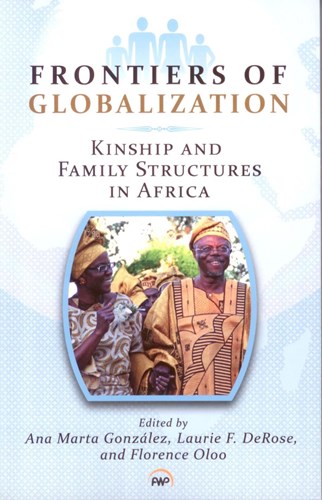 Globalization has had a significant impact on Africa.  Yet the nature of this impact is not homogeneous, and not only because globalization is a complex process, but also because of African diversity.  Most African nations have high levels of cultural and linguistic diversity that offer them a rich array of possibilities.  Nation building has therefore faced the challenges of integrating multicultural traditions with globalization.  This volume focuses explicitly on the effects of globalization on African family structures.

Family structures or kinship models are the result of local cultural histories as well as global cultural ideals disseminated through global institutions and media.  Understanding how these two realities interact can be challenging.  In the face of universal declarations about the role, nature, and status of the family in public life, this volume illustrates how African family structures and kinship models do not fit in easily with Western models or understanding of the family, and also that they are manifested in very diverse ways within the continent itself. To that end, the editors have gathered together a collection of essays that offer an assessment of the effects of globalization on family structures in Africa.

The contributors to this volume are drawn from a wide variety of academic fields, including anthropology, sociology, law, political science and literary theory.

Buy it directly from Africa World Press.  Buy it from Amazon.