The Meaning of Marriage: Family, State, Market and Morals

The best of contemporary scholarship on marriage from a variety of disciplines —history, ethics, economics, law and public policy, philosophy, sociology, psychiatry, political science— to inform, and reform, public debate. 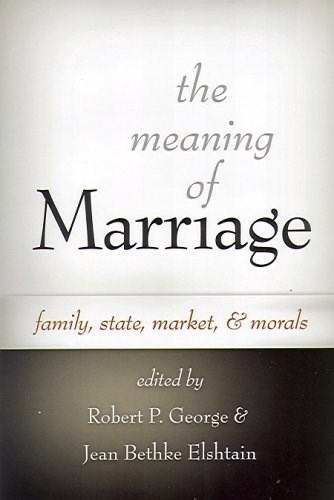 The movement for same-sex marriage has triggered an unprecedented crisis in the social norms and laws governing marriage. All great civilizations have sought to unite, in the institution of marriage, the goods of sexual intimacy, childbearing and childrearing, and life-long love between adults. But the last five decades have witnessed the erosion of marriage as a public institution in the developed world. The separation of the goods previously united in marriage has led thoughtful people to question why marriage should be denied to homosexuals.

This volume brings together the best of contemporary scholarship on marriage from a variety of disciplines —history, ethics, economics, law and public policy, philosophy, sociology, psychiatry, political science— to inform, and reform, public debate. Rigorous yet accessible, these studies aim to rethink and re-present the case for marriage as a positive institution and ideal that is in the public interest and serves the common good.

The essays in this volume were presented to an audience of scholars, journalists, public policy experts, and other professionals at STI's Why Marriage is in the Public Interest experts meeting co-sponsored by the Witherspoon Institute in Princeton in December, 2004.

Buy the book from Amazon.

Foreward by Jean Bethke Elshtain, Laura Spellman Rockefeller Professor of Social and Political Ethics at the University of Chicago and the Thomas and Dorothy Leavy Chair in the Foundations of American Freedom at Georgetown University.

1 - "Sacrilege and Sacrament," by Roger Scruton, professor of philosophy at the University of Buckingham.

2 - "What About the Children? Liberal Cautions on Same- Sex Marriage," by Don Browning, Alexander Campbell Professor Emeritus of Religious Ethics and the Social Sciences at the University of Chicago Divinity School and Elizabeth Marquardt, affiliate scholar at the Institute for American Values.

3 - "Changing Dynamics of the Family in Recent European History," by Harold James, professor of history at Princeton University.

4 - "Why Unilateral Divorce Has No Place in a Free Society," by Jennifer Roback Morse, research fellow at the Hoover Institution, Stanford University.

6 - "The Family and the Laws," by Hadley Arkes, Edward N. Ney Professor of Jurisprudence and American Institutions at Amherst College.

7 - "What's Sex Got to do with It? Marriage, Morality, and Rationality," by Robert P. George, McCormick Professor of Jurisprudence and director of the James Madison Program in American Ideals and Institutions at Princeton University.

8 - "Soft Despotism and Same-Sex Marriage," by Seana Sugrue, associate professor and chairman of the department of political science at Ave Maria University

9 - "(How) Does Marriage Protect Child Well-Being?" by Maggie Gallagher, president of the Institute for Marriage and Public Policy.

10 - "The Current Crisis in Marriage Law, Its Origins, and Its Impact," by Katherine Shaw Spaht, Jules F. and Frances L. Landry Professor of Law at Louisiana State University.

11 - "Suffer the Little Children: Marriage the Poor, and the Commonweal" by W. Bradford Wilcox, assistant professor of sociology at the University of Virginia.